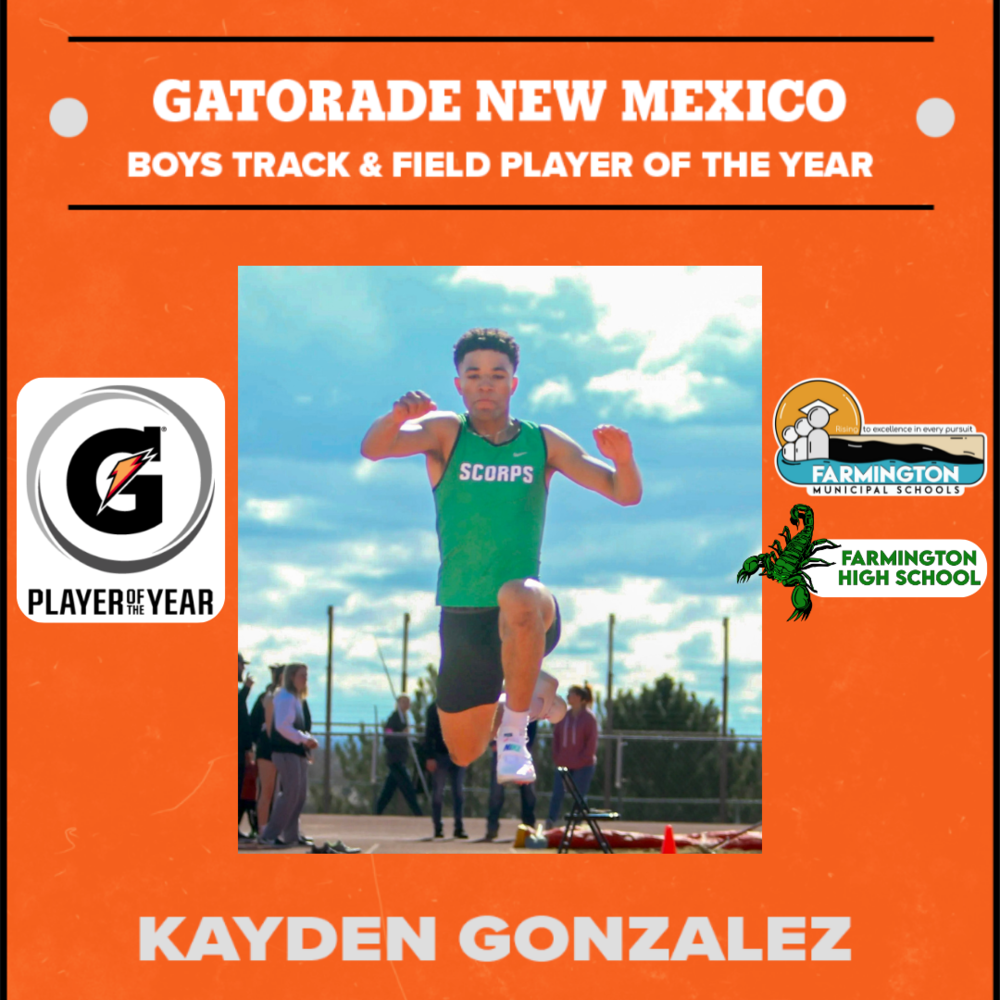 The 5-foot-10, 160-pound senior exploded for 29 individual points at the Class 5A state meet this past season, leading the Scorpions to third place as a team. Gonzalez won the triple jump with a personal-best leap of 47 feet, 0.25 inches, took second in the long jump with a 22-2.25 effort, finished third in the pole vault with a clearance of 12-6 and placed fourth in the 300-meter hurdles with a time of 40.77 seconds. A two-time state champion in the triple jump, his leap in the event at the state meet ranked tied for the nation’s No. 57 distance among prep competitors in 2022.

Gonzalez has volunteered mentoring special needs students at the Sycamore Community Center and has donated his time coaching middle school track athletes with their jumps technique. “Kayden is a class act student-athlete and teammate,” said Farmington head coach Jeff Dalton. “He always has a positive attitude.”

Gonzalez has maintained a weighted 3.34 GPA in the classroom. He will attend school and participate in track and field at Pima Community College this fall.

Gatorade has a long-standing history of serving athlete communities and understands how sports instill valuable lifelong skills on and off the field. Through Gatorade’s “Play it Forward” platform, Gonzalez has the opportunity to award a $1,000 grant to a local or national organization of their choosing that helps young athletes realize the benefits of playing sports. Gonzalez is also eligible to submit a short video explaining why the organization they chose is deserving of one of twelve $10,000 spotlight grants, which will be announced throughout the year. To date, Gatorade Player of the Year winners’ grants have totaled more than $3.5 million across more than 1,300 organizations.

Since the program’s inception in 1985, Gatorade Player of the Year award recipients have won hundreds of professional and college championships, and many have also turned into pillars in their communities, becoming coaches, business owners and educators.

To learn more about the Gatorade Player of the Year program, check out past winners or to nominate student athletes, visit playeroftheyear.gatorade.com or follow us on social media on Facebook at facebook.com/GatoradePOY, Instagram at instagram.com/Gatorade and Twitter at twitter.com/Gatorade.